YourOtherMind Markup is a lightweight markup language to write entirely with plain-text and then, via an exporter, transform into Word documents or ePub files.

NOTE: Some of the screenshots taken here were using an earlier version of the YourOtherMind markup formats — the exact visuals depicted may be different in the latest release.

Here is an example of the markup language used in action: 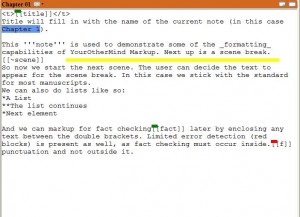 In this example the ‘green blocks’ show particular control codes on the note, drawing attention to them. All the visual details are part of the markup language except where Storyboard List is highlighted in blue, this was done manually by myself.

This is the same text note after being exported using Addin_SendTextAway. 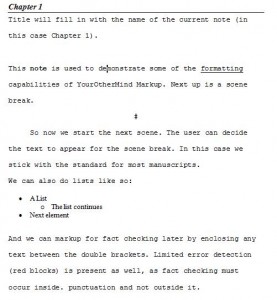 Footnotes
[[footnotelink footnote1]] places an anchor for a footnote at a particular location in the text
[[footnoteadd foonote1|the text you want to show up on the footnote itself]] The definition fulfilled for the footnote.
[[~Footnotecount]] counts the number of footnotes

Titles
<t>[[title]] Name of Chapter</t> This will automatically label the chapter, and incrememnt, as new [[title]] tags are found. Basically, title each new chapter like this and, if exporting through the SendTextAway plugin, each will be placed in their own chapter file.

Misc
[[~scene]] Scene break
[[~pagebreak]] Page break
[[~left]] Left justifies
[[~right]] Right justifies
[[~center]] Centers text
<t>Title</t> -- Creates a basic title, but the [[title]] approach, above, is the preferred.
|link url|link title| Creates links
|path to image file| will insert an image (a handy trick with big projects is to encode an image path as a Variable and just include the variable reference here)
[[Anchor #AnchorName]] creates an anchor to link to
|##AnchorName|Label for link to Anchor| Creates a link to the Anchor defined as AnchorName.
[[~TOC]] Generates a table of contents based on headings

There are also a few ePub specific features. The following allows identifiers to be filled in that are later used when creating the ePub

It is possible to add tag elements to the markup language for a specific requirement. These are discussed in more depth on the Addin_SendTextAway page (where we discuss the exporter).

Parse Facts and Search All Text On Layout

This markup also brings in the ability to create Storyboards with links to notes containing specific text.

A fact list takes text that has been marked like [[such]] and creates groups in a Storyboard, using the fact titles (in this case “such”). That is, any text matches with [[such]] would appear in a group on the storyboard called “such”. This lets the writer track various plot points more readily, or to leave notes in sections that require more elaboration.

Special codes are required to indicate where the fact parser needs to look for facts. Here is an example.

In this situation a storyboard named “factlist” must exist; this is where the fact information will be stored. The [[bygroup]] indicates we want to sort by the group name (the “such”, as noted, above). If we used [[bychapter]] instead, then the found facts would be sorted by chapter instead of by fact type.

The final line tells the fact parser to look for the information on the storyboard named “Storyboard”, inside any groups that start with the word “Chapters”.

Every note in those groups will be parsed for facts. The final output will be spit into the storyboard named “factlist”.

The following image shows a simple example with facts being extracted from the note named “Facts”. Clicking those found facts will go to that note and the text found. 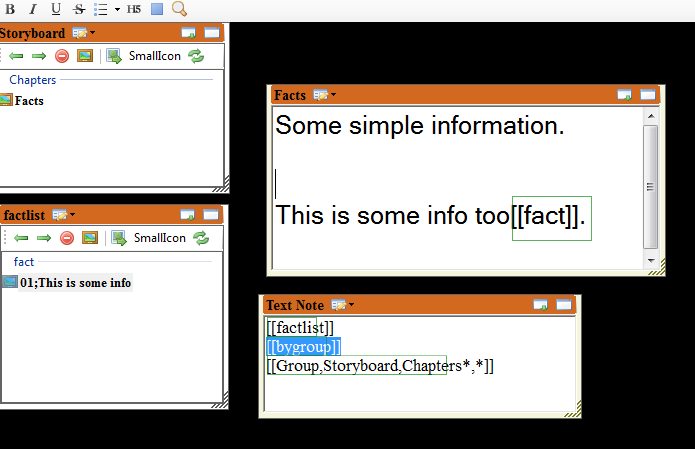 Searching text works much the same as grabbing facts. It will create a list in the indicated storyboard (in the following example that is named “searchlist”). The next line is the text to search for. The final line is where to look.

Running this will generate a list of any notes with the specified TextToSearchFor.

See the SendAwayText AddIn for how this markup can be used to export Word Documents and ePub files (for distribution to Kindle, Kobo, Nook, Apple devices, and so on).