Table Notes inherit functionality from the Label Note, while adding several key features, that are integral to much of the customization within the YourOtherMind writing environment.

Almost every list that is able to be edited is stored on a table in the system note. Users can also add their own table notes to organize whatever they desire. The table behaves like a standard (albeit simplified) table seen in Excel or the like. A few helper functions exist to make the table editing experience more efficient.

For users, tables are useful for creating lists (especially randomized lists, such as are required for randomizing character traits) or keeping track of revision progress, in checkpoint form.

The row of buttons on the special table toolbar, from left to right, perform the following functions:

We have already mentioned two special column names, “roll” and “result”. There are also two others, “Modifier” and “Next Table”. These four columns together are the default columns when a new table is created (but users are free to create their own column names).

Next table is used when CHAINING random tables together. By specifying a name here, if this result is selected, then a random result from the table specified in Next table, will also be selected and appended to the initial result. This chaining can continue as deep as desired. 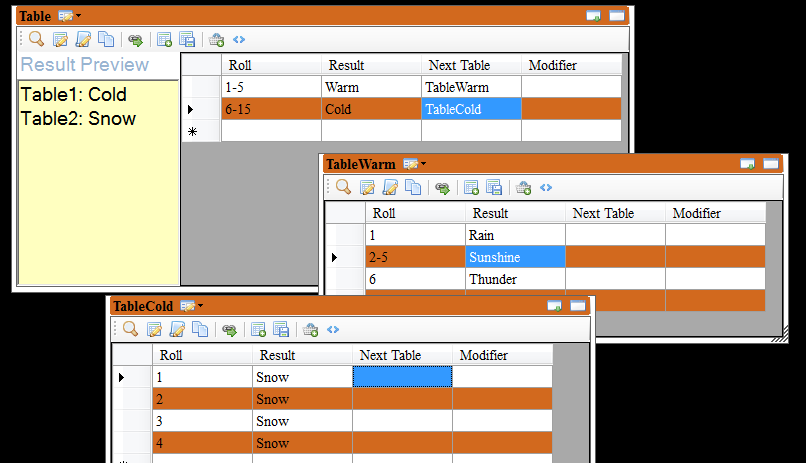 In this image we see one table that leads to either the TableWarm or the TableCold, depending on the initial roll.

Modifier is used to influence the value sent to Next Table (to skew the results of the random roll on that table). That is, the user may specify that when a particular result is obtained, the next table starts off with +10 to the random roll. This might remove certain lowered numbered elements from consideration.

TIP: Clicking on the name of a column will sort by that column.

Tables have a few other fields, that can be set via the PROPERTY MENU.

YourOtherMind ships with a few random tables available from invoking from the Layout Bar. More useful is that users can add their own tables here.