War of the Worlds:Frontlines Update 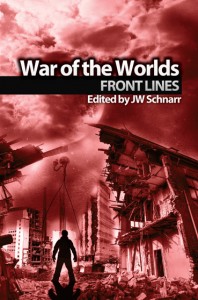 Reviewed the edits for “John’s List” which will be appearing in the War of the Worlds anthology set to appear sometime in April and sent them back to the editor a couple days ago.

The full table of contents is:

After Welles by Michael Scott Bricker
Weird Fruits by Camille Alexa
Killers by Vincent L. Scarsella
The Dodo Dragon by Sheila Crosby
The Virus of Memory by Gerard Daniel Houarner
What Makes You Tick by David Steffen
The Broken Hand Mirror of Venus by Mark Onspaugh
Common Time by Bruce Golden
Steve’s Really Cool Movie Blog by RJ Sevin
Moth Tamuth Robotica by Kristen Lee Knapp
Empire of the Moon by Harper Hull
The Spacer and the Cabbages by Auston Habershaw
John’s List by Brent Knowles
Tequila Sunset by Michele Garber
Another End of the World by Michael Penkas
A Sweetheart Deal by JW Schnarr and John Sunseri
The Rainmaker by Mike Barretta
News on the March by Edward Morris
My Beautiful Boy by Jodi Lee
To Love a Monster by Victorya
The Candle Room by James S. Dorr
Usher by Davin Ireland
Gauss’s Invitation by Gary Cuba

If titles are any indicator of story merit there are some potentially cool stories in here.