Story available on the Kindle 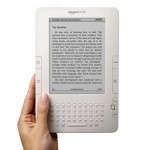 While I don’t have a dedicated ebook reading device like the Sony reader or the Kindle I have been reading eBooks and stories on my Ipod Touch for almost a year now. I have all the various bookstore apps on it including Stanza, eReader and Kindle.

But what I hadn’t thought about, ever, and I should have probably, was republishing my previously printed stories this way. I had looked into Fictionwise to see if they’d take my story reprints but I’m not established enough to qualify. After reading a post by Michael Stackpole where he was talking about updating his stories on the Kindle I checked into it.

Now I have no delusions that anyone knows me enough yet to buy stories based on my name but I figured it wouldn’t hurt anything to post one of my previously published stories. After all anyone using the Kindle, the iPhone, the iPod touch, and presumably the newly announced iPad from Apple, will have access to it.

So I put The End of the Road (first published in Not One of Us way back in 2006) up on the weekend. Check it out, if you want (it is still available at AnthologyBuilder too).

I’ll put up details on how well it is doing in a couple months.