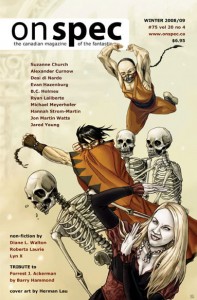 A solid issue, as usual.

My favourites this time around would be:

Every Single Round a Last Call – Ryan Laliberte
This was a more interesting than normal time travel story. A man is stuck moving through time, but sits in a bar, the bartender a constant presence in his life while everything else  changes constantly. I found this story enjoyable because both characters were interesting and both had secrets that were only revealed through the course of the story. Plus the events occuring in the background, outside the bar — the constantly changing timeline — were interesting.
Graveyard Orbit – Jon Martin Watts
A man, nearing retirement, is performing his last salvage job. He encounters an old robot and the interactions between the two characters were very amusing and drew me into the setting and the story. A good, fun read.
The Corrections – Jared Young

A man gets his first cell-phone and immediately receives a call from a mysterious, but helpful stranger. Over the course of his life the man receives more calls, all the while puzzling to determine the identify of the caller. What I enjoyed about this story was the characterization, the main character is interesting and authentic, his experiences feeling genuine. This is just a guy, with a somewhat supernatural phone.