What does it do?

Naming Central is part of StoryFlesh and is the place to go to explore different random names, scrolling through randomized lists to pick a name that fits perfectly. It was created as an alternative to the one-off random name generation available on any richtext note.

How To Use It

Random names can be generated and assessed in a simple to use manner through StoryFlesh. This new system, called Naming Central, allows users to pulls names from an Dictionary, a random language file included, or create their own random language. In any case the interaction is the same, and is summarized here. Later on this page we’ll explain how to modify the dictionary and create unique languages.

To generate a name simply choose the parameters, as shown in this screenshot. 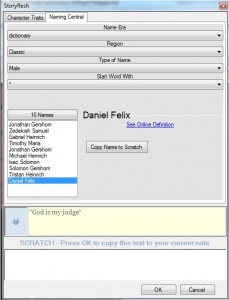 File.The first entry, with ‘dictionary’ selected is the list of possible language files that can be used. Later we’ll show how to create new languages. Dictionary is the base English-US dictionary.
Region. Within the file chosen different regions can be set up. When getting a random name, the search can be of a particular language region, such as Germanic.
Gender. What it says on the tin.
Start Word With. Select a particular character to use or choose * for a random one.

Selecting a name allows a definition to be viewed, if one exists and a link is provided to an online definition site. Pressing Copy Name to Scratch copies the name to the textbox at the bottom of the form and then pressing OK will copy the name into the current richtext note being used.

This is the default type of generated language.

Custom language creation basically works via a series of rules where the user describes the alphabet for the language, which rules (letters) are more likely to occur and which letter patterns tend to follow particular letters. A series of examples follow to help explain how an interesting language can be developed.

The best way to create a new language is to look at the gooby.era file for an example.

With these three rules the generator will create words starting only with A, B, or C. And that is it. But we can add more letters by doing this:

This will give us a, b, or w in the second and subsequent positions of our random word (i.e., Aba, Baw, et cetera).

Now we can get into more complicated patterns of characters

By specifying a position the user can control when vowels appears and where and other specialized rules.

Here there is an equal chance of an e or i being the third character in a word.

Special rules can be defined for male, female, and lastname types, and regions.

In this example, female names from the ‘Upper Region’ (a made up place for a made language) will have a very strong chance of starting with the letter P.

When listing rules put the MOST specific rules at the top of the rules section... i.e., the gender/region rules. This is because only one exact rule can exist and the first one in, stays (i.e., if male names have a rule that specifies the first letter of their name is always a D, this has to be above the generic language rules that state what the first letter should be).

In this example the letter A will have a strong chance of being followed by the letters ‘pp’.

Groups can also be created. This saves having to enter redundant information in the file. Instead of listing out every vowel a vowel group can be defined.

The third position in a word will be a vowel. A user can create any kind of group, if they want, like @flynames or whatever.

If you do create a cool random language and want to share it with others let me know and I can post it here — or you can post a link to it in the comments section on this page.