Now that I’m self employed I’ve found that I have had to create my own ‘progression system’ to help keep myself motivated. So I pick out ‘toys’ and after reaching certain writing goals, I buy them.

Now the point of this is to buy things I don’t really need, but will maybe amuse me or the kids for a bit.

Now I’ve always been interested in the hydrogen fuel cell and I was curious to see one in action. So my latest gift-to-myself is the H-Racer 2.0 from Horizon Fuel Cell Technologies. It only took a couple days to arrive and is what it looked like after I opened it up: 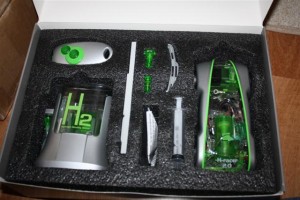 I tried reading the instructions right away and was momentarily annoyed when I saw that it did require batteries (for the remote) but once I dug everything out it turned out that they were in the package.

The kit contained:
– the car (there is some assembly required, not too complicated)
– a fuel station that converts water to hydrogen
– the remote (and batteries!)
– a solar panel to power the fuel station (which can also use 2AA batteries instead, if you, like me, don’t have a lot of sunlight available)

The assembly of the car took some doing but I had a 2yr old and a 4yr old helping. The instructions were a bit confusing until I stopped to figure out what each part was, and what it would be used for. It was fairly simple, in the end… basically hydrogen enters the car from the fueling station and goes into a balloon reservoir, which in turn is hooked up to the fuel cell (and also a purge valve, which can be pressed to expend the hydrogen).

Anyways the fuel station comes preassembled so Ii just had to pour some water into it and then fill the car (they recommend a couple fills/purges/warmups before you actually drive the car). Once the car was ready it was simple to use and the kids had fun driving it around the house.

The car doesn’t last long, a few minutes of driving maybe and the range on the remote is quite weak. Still it is kind of cool in a geeky-science kind of way.

As a toy or RC car this is not worth the money but as a demonstration of a possible alternative energy source, it was worth it. And the kids enjoy ‘running out of gas’ and having to go fill the car up. Down the road I’ll probably start taking it apart, perhaps using the fuel cell in some other project. And maybe if I can find some use for hydrogen, the fueling station will find another use too.

So if you’re curious about this technology (or am a science teacher) and have money to burn, buy it. Otherwise you might want to check out some of the other products the Horizon Fuel Cell people have — wind mills and solar kits and whatnot.